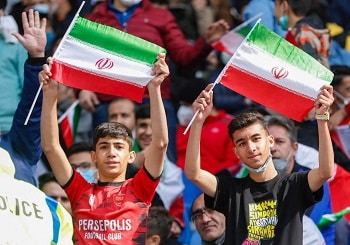 The Islamic Republic of Iran, which shares a border with Qatar, has stepped in to help its neighbors by offering free visas to World Cup fans.

Qatar is preparing the best it can to welcome the 1.5 million visitors expected to host the World Cup. However, the accommodations on land are not enough to meet the estimated crowds that will hit the country’s shores later this year.

Iran has now stepped in to offer some help to its neighbors by offering their country accommodation for visitors and giving them free visas as long as they can prove they are attending the World Cup.

This was stated by the spokesman for the country’s executive government, Ali Bahaduri.

Bahaduri wrote on Twitter: “Another agreement reached during the president’s visit to Qatar has been implemented. With the government’s approval today (Friday, April 13, 2022), it was decided that the issuance of visas to visitors seeking to travel to Iran during the 2022 World Cup will be free of charge.”

“This certification could be effective in attracting and encouraging World Cup tourists to travel to Iran and in boosting the country’s tourism industry.”

Qatar is located only 140 kilometers from the southern Iranian coast which means that visitors can take daily boat trips from Iran to Qatar to experience the matches of the 22nd edition of the World Cup.

Iran and Qatar previously signed an agreement to allow the visiting masses to enter via Qatar, but the free visa will help speed things up and make things easier with the ticket request.

Iran will also take part in the World Cup, and it is in the most political group in the tournament along with England, the USA and either Wales, Scotland or Ukraine.

The Asian team hopes to finally get out of the group stage in this edition.