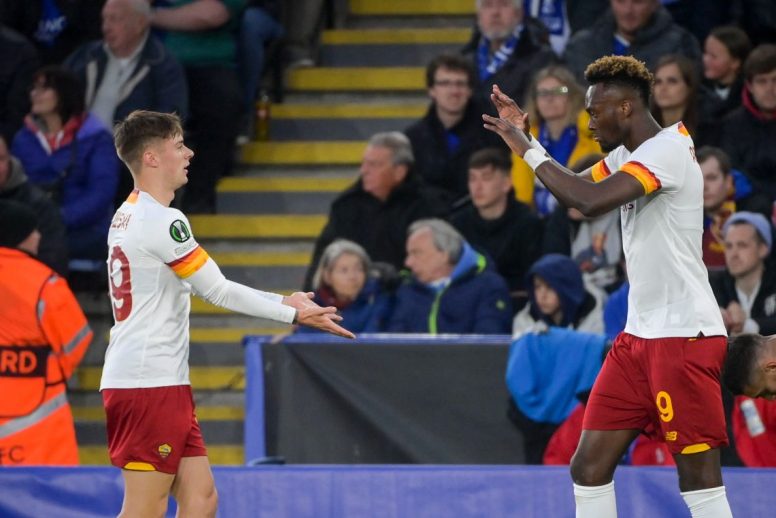 José Mourinho’s Roma failed to defeat Leicester in the first leg of their Conference League semi-finals but can be satisfied with the result of Thursday night’s clash.

That Giallorossi left King Power Stadium with a 1-1 draw and confidence that a new star is being born in the Eternal City as 20-year-old Nicola Zalewski put on a superb performance embellished with an assist for Lorenzo Pellegrini’s opener.

The Foxes equalized in the second half with Ademola Lookman after dominating the game for large periods of time. All in all, it was a fair result that leaves all possibilities open as the two sides prepare to face off again in a week’s time at the Stadio Olimpico in a bid to book a ticket to the Tirana final.

Pellegrini opened the scoring from a brilliant Zalewski pass

England took the initiative from the start, taking three corners in the first three minutes, coming very close to a Timothy Castagne header. Leicester gained a lot of possession but produced few chances as Roma were very well positioned across the field and defended with order.

Their entire back three shone as Gianluca Mancini, Chris Smallling and Roger Ibanez neutralized most of Brendan Rogers’ initiatives.

Conversely, the Roma drew blood for the first time when they first showed up in Kasper Schmeichel’s area. It was Zalewski to mollify that Giallorossiwhen he invented a spectacular diagonal pass to Lorenzo Pellegrini from the left – a feat almost identical to the one he had shown against Bodo/Glimt in the quarter-finals that had resulted in Nicolò Zaniolo’s goal.

The captain received the ball in the middle of the penalty area and played Schemeeichel to put Roma in the driver’s seat after 15 minutes.

Things soon got worse for Brendan Rogers, who lost Castagne through injury and had to send off James Justin after just 21 minutes. However, Leicester slowly regained control of the game and finished the first half in attack.

Ademola Lookman was the Foxes’ most dangerous weapon with two shots in five minutes. His first try was pushed back by Smalling, while his second shot from outside the box was fisted by Rui Patricio.

Before half-time, James Maddison took charge of the home side’s attacks with a flick that went over the bar and then a shot that caused some trouble for the Roma goalkeeper.

Leicester continued to attack after the restart but Rui Patricio suffered no real threats until 60 minutes when Rodgers made a double substitution, bringing on Harvey Barnes and Kelechi Iheanacho, replacing a disappointing Jamie Vardy.

This really helped as an exchange between the two resulted in Barnes opening a gap in the Giallorossi‘s box and serving by Lookman from the left size. The Foxes’ number 37 made no mistake from close range as he anticipated Mancini’s attempt to clear and slotted the ball into the back net.

The equalizer boosted Leicester’s morale as the Foxes continued to attack for the rest of the game and Roma struggled for a few minutes before reorganizing. A defensive error by Bryan Cristante led to a tricky Iheanacho shot that sent Rui Patricio back into action.

That Giallorossi But they also had their chances, especially when Tammy Abraham sent a spectacular back pass to substitute Sergio Oliveria. Schmeichel saved from the Portuguese’s shot and kept his team afloat.

Mourinho sent on Matias Vina and Felix Afena-Gyan in the final minutes of the game but there were no more chances for either side. The outcome of the semifinals will thus be decided next Thursday at the Stadio Olimpico, where Roma will at least have the advantage of their home fans.