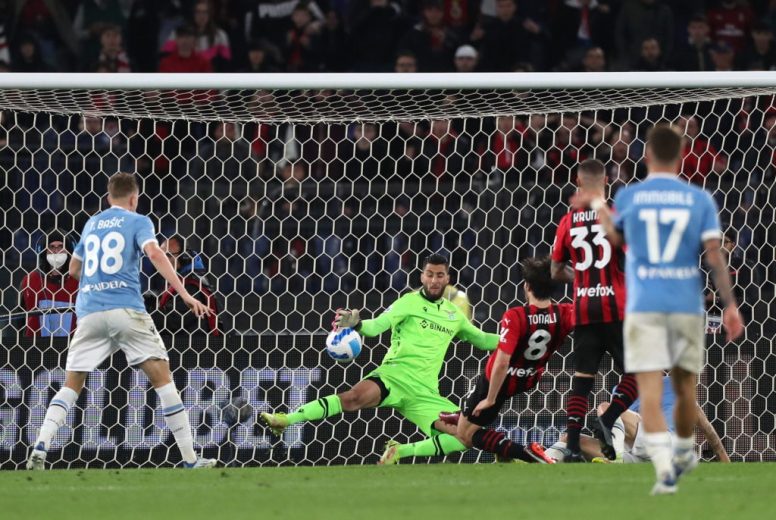 Milan went to hell and back at the Stadio Olimpico in Rome on Sunday night as they conceded an early lead against Lazio before coming from behind and clinching three vital points with goals from Olivier Giroud and Sandro Tonali.

Had the Rossoneri If they couldn’t win tonight in Rome, their title shot chances would have taken a serious blow. But thanks to Tonali’s latest goal, the fight for the Serie A throne will continue to excite Italian football fandom as Milan maintain their two-point lead over Inter – considering Simone Inzaghi Nerazzurri have one game left (they meet Bologna on Wednesday).

Maurizio Sarri will be furious for the way Biancocelesti gambled away his lead and accumulated a series of defensive errors in the final stages of the game that eventually cost his side some valuable points en route to a place in next season’s European competitions.

The start was a nightmare for Stefano Pioli’s side as Lazio scored just five minutes after kick-off. It was Ciro Immobile who made the scorers’ list as he anticipated Pierre Kalulu in the center of the box to make the most of a Sergej Milinkovic-Savic proposal from the right.

Milan felt the hit and the Biancocelesti were in control for much of the first period. Felipe Anderson also shared a lavish endorsement for Immobile Rossoneri defensive line but Mike Maignan came to the rescue and got ahead of the Lazio bomber by a split second.

Rafael Leao was the most active for Milan. His movement in the 28th minute was brilliant but his shot hit the side netting. Three minutes later he challenged Thomas Strakosha from outside the box but found the Albanian keeper wary.

That Rossoneri built up pressure towards the end of the first half but nothing came of it save for a free kick from Theo Hernandez from sidereal distance which was pushed back by Strakosha and a penalty call for an alleged handball from Luis Alberto which was dismissed by referee Marco Guida.

Milan win with Giroud and a last minute Tonali effort

However, Milan’s equalizer came early in the second half thanks to a brilliant initiative from Leao. It was Olivier Giroud who wrote his name on the scorecard, but the Frenchman’s close-range shot was only possible because the Portuguese starlet believed in a ball that seemed destined to cross the end line and sent it into a golden assist for converted the former Chelsea striker.

The Devils didn’t stop, trying to build on their momentum to find a second goal. Sarri seemed to have no answer and changed some of his men to bring him fresh forces Biancocelesti Side. Danilo Cataldi and Toma Basic were the first to enter the field, but the initiative remained with the red-blacks.

Junior Messias defeated Stefan Radu and launched down the right flank to finish his shot with a shot at the far post, which sailed just wide. Sarri saw his defender was struggling and replaced him with Adam Marusic.

The next changes came from Pioli and made some noises like that Rossoneri Ante Rebic and Zlatan Ibrahimovic sent gaffers, Rade Krunic added a few minutes later. Sarri’s next moves were Elsaid Hysaj and Luiz Felipe.

With the final spark and just before Alexis Saelemaekers gave way, Leao fired again at Strakosha, who responded with a fine save. The keeper also blocked Rebic’s shot from outside the box while Milan continued to attack. Ibrahimovic also had a chance, whose shot was triggered by a defensive error by the Lazio side. It’s good for Sarri that his defense managed to recover and repel the Swede’s attempt in the corner.

The battle at the Stadio Olimpico appeared to end in a stalemate but Milan’s pressure finally bore fruit in the final minutes of the game. It was sheer willpower as Rebic Marusic snatched the ball from his feet and whipped it into the center of the box, where a botched clearance by Francesco Acerbi set off Ibrahimovic’s pass to Sandro Tonali.

The Brescia youth performance product put his foot out just enough to anticipate Strakosha and hold that Rossoneri in the fight for the title.

What’s next for Lazio and Milan

Four games before the end it’s about the fight for the scudetto is the most insecure. Milan don’t have an easy calendar ahead as their next opponents will be Vincenzo Italiano’s Fiorentina – the the Rossoneri will welcome next Sunday at the San Siro. On the same day, the city rivals travel to Udine to face off against Udinese.

Lazio plays Spezia at the Alberto Picco Stadium on Saturday. That Biancocelesti They currently sit 7th in the table, two points behind Roma and one behind Fiorentina, and still have a good chance of qualifying for next season’s Europa League.