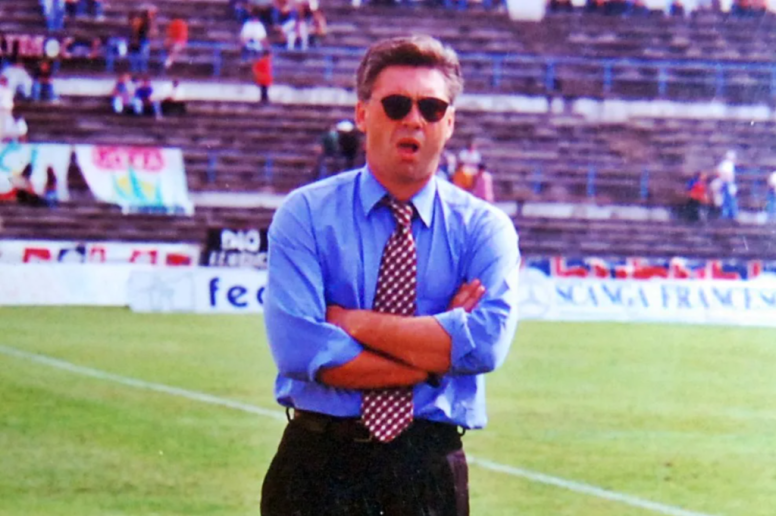 When Carlo Ancelotti won La Liga with Real Madrid and became the first manager to win the title in all five of Europe’s top leagues, his incredible coaching career came under scrutiny. What’s his secret? How did he get this far? And besides, how did it all start?

The road to success is long and winding, they say.

But while his rise hasn’t necessarily been meteoric, the story of Carlettos early days on the coaching bench are not humble beginnings and years of minor league apprenticeship. Carlo Ancelotti didn’t have to last very long getta (as the Italians call it) before breaking through as a coach. Nevertheless, his first stint was a test and risked an abrupt end.

In the summer of 1995, at the age of 36, Carlo began his managerial career with Serie B club Reggiana. He led the grenade to an instant promotion to the top flight, but not before he was on the verge of getting the boot just two months into his first job.

Reggiana is the main club of Reggio Emilia, in the heart of the Po Valley. In opting for Ancelotti, they came out of a two-year stint in Serie A for the first time in their history. Those were exciting times, seeing a low-table Italian club field the likes of Portuguese ace Paulo Futre and Brazil starting goalkeeper Claudio Taffarel could.

However, after a last-minute rescue in the 1993/94 season, Reggiana endured a disastrous next season in which they scored just 18 points out of 68 available (losing 16 of their 17 away games).

But the club was still ambitious. Its owner was the Vulcan Franco Dal Cin, a former sports director who had brought the Brazilian world star Zico to Udinese in 1983. Dal Cin owned the majority of the club’s shares, but the actual chairman was winemaker Loris Fantinel.

Reggiana were the first Italian club to build and own their stadium – a rarity in Italy lime still today. The Stadio Giglio was state of the art at the time. It is now the Mapei Stadium – Cittá del Tricolore and hosts Sassuolo’s home games.

To fulfill such ambitions and bring that grenade Promptly back in Serie A, Dal Cin wanted a young manager. Ancelotti was a charming bet. A legend on the football field with the shirts of Roma and Milan, he had no leadership experience. His former coach and mentor Arrigo Sacchi always had his “coaches on the pitch“. But to lead a team really was a different story.

When Reggiana’s call came, Ancelotti had only served as an assistant at Sacchi’s court when the Prophet of Fusignano held the reins of the order Azzurri. He didn’t even have a coaching license, so the first thing he had to do was find someone to act as a front manager while being the de facto coach.

He found Giorgio Ciaschini almost by accident, who worked with him for more than 20 years during his stints at Parma, Juventus, Milan, Chelsea and Real Madrid.

Reggiana was a brand new team. Dal Cin’s transfer market strategy has been difficult to sustain, to say the least. Players came and went and the club’s squad ahead of the 1995/96 season included no fewer than 12 new names.

The new goalkeeper was the experienced Marco Ballotta, who went on to play for Lazio and at 44 became the oldest player ever to feature in a Serie A game, as well as a Champions League game.

That grenadeThe backbone of consisted of a solid group of players who knew Serie B very well – including Massimiliano Tangorra, Leonardo Colucci and Marco Schenardi. For many of them, the season at Reggiana under Ancelotti’s tenure would help kick-start a Serie A career.

The most talented of the bunch seemed to be midfield journeyman Pietro Strada, who at 26 also had plenty of experience in smaller leagues. In the end, he became the season’s top scorer with eight goals – as did Russian striker Igor Simutenkov, who was one of the few survivors from last season.

There was also room for a former Italy international like Fernando De Napoli, despite being Napoli twice at 34 scudetto Sieger was well past his prime.

If the campionato Kick-off, the early results gave the impression that young Ancelotti had no idea what he was doing.

The first game was a dismal 0-0 home draw against Palermo. The second saw them grenade Case 0-2 to Minnows Pistoiese. Reggiana could not record a single win in the first six games.

On October 8, they hit rock bottom in Round 7 when they were beaten 4–1 in Pescara despite scoring first. Ancelotti seemed close to being fired. President Dal Cin was furious after the game. He told the press that he would make a decision about Ancelotti in the coming hours.

It was rumored that many experienced trainers, including veteran Giovanni Galeone, were in line to take over grenade‘s reins. But somehow Carletto got another chance.

Apparently it was because the players were on his side. Ancelotti brought her to a ritiro, a behind-closed-doors training camp to forge and nurture the spirit of his team. He has never been a friend of such extreme solutions, as attested by his refusal to back his club’s decision in the days of the infamous ‘Napoli Mutiny’. But in this case it seemed to work.

The following week, Reggiana took Venezia by storm, scoring three goals in the first 45 minutes in what Ancelotti himself described in his autobiography as one of the most important games of his coaching career.

Had he lost that game, he almost inevitably would have gotten the axe.

Instead, his course took a different path. Reggiana woke up and collected 13 of the next 15 available points, beating Salernitana, Avellino and Bologna in the process. Next came an unexpected 0-3 pounding by Foggia, but that was the last real one gaffe in Ancelotti’s season.

Halftime of the league, the grenade climbed to the top of the table. While Strada emerged as the club’s secret weapon, Reggiana’s rise was largely the result of a team effort. The least likely players found the back of the net. Defender Paolo Ziliani scored once but his exploit gave Ancelotti’s side a vital win over Salernitana.

Young striker Michele Pietranera, initially on the bench, was revived later in the season by Ancelotti and thanked his coach with a lone goal that earned him an important 1-0 win at Brescia.

The second half of campionato saw Reggiana lose more points than expected, but it was still enough to take fourth place in the finals table, the last that meant promotion to the top flight (there were no playoffs then).

They celebrated a week in advance thanks to a lone Strada goal in a six-point climb against Verona.

From then on, Ancelotti’s progress would be steady. His heroic deed could not go unnoticed. The following season, Ancelotti moved 35km west to coach regional rivals Parma – just as his mentor Sacchi had done to boost his career. The rest of his story is known.

Reggiana would only last one season in the top flight. Their 1996/97 season was terrible, with another whirlwind of players coming and going from Reggio to salvage a season that seemed doomed from the start.

That grenade Has not been seen again in Serie A and has had a number of adventures over the past two decades, including being chaired by US baseball legend Mike Piazza. Today they play in Serie C, the third division lime Pyramid.

But they still remember the days when a young coach whose future was yet to be written, a local (Ancelotti was born and raised in Reggiolo, a small town of which Reggio Emilia is the provincial capital), let them taste the heights of the world Serie A for the last time.