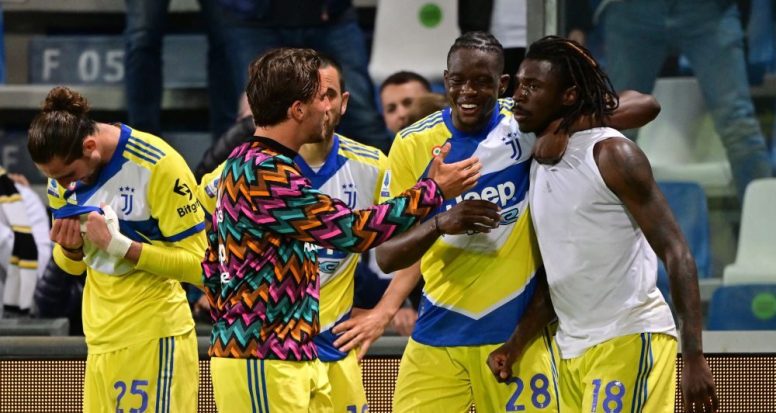 At the end of the 34th round of Serie A, Sassuolo hosted Juventus at the Mapei Stadium. After dominating the game in the first half, the Emilians finally broke the deadlock thanks to a smooth game completed by Giacomo Raspadori. Still, the lead didn’t last too long as Paulo Dybala took the lead Bianconeri back on par with a vicious shot. While the two sides had seemingly settled for a draw, Moise Kean played the super-sub role by nabbing a late winner that put the old lady on the cusp of Champions League qualification. So here are our player ratings for the Sassuolo vs Juventus clash.

The former Atalanta keeper denied Morata with an excellent save early in the second half. Dybala, however, smashed him with his thunderous shot but perhaps should have taken a better shot at Kean’s winner as he slipped the ball between his legs.

The Turkey right-back put in an energetic display and even threatened a couple of shots. But made an early mistake in defence, allowing Morata a run on goal after a failed clearance.

The centre-back was solid for the most part but perhaps gave Dybala that little extra space he needed to fire his rocket towards goal.

The Romanian veteran, reminiscent of his partner in defence, looked composed in defense and made some important clearances. But at the end of the day he was beaten by the younger and fresher Kean en route to the winner.

The Greek got off to a slow start but his performance grew with the match. His impressive work on the left flank initiated that Neoverdis only goal. Tried his luck at shooting in the second half and came close once. Ball loss for Morata shortly before the old lady’s equalizer.

Sassuolo dominated possession from start to finish and the former Marseille player is one of the main reasons for that. Drafted the game in the middle of the park, controlled the pace and generally had the upper hand over his Juventus counterparts.

A courageous performance by the Roman, who was involved in the action at both ends of the pitch. His header went just over the goal, then Szczesny tested with a shot. Made an important block to stop Dybala’s shot heading for goal.

The Sassuolo captain was naturally behind most of his team’s chances. Tried his luck with a wonderful shot but the Juventus keeper made a decent save to thwart it. Prepared the support for raspadori with a fabulous strip.

The Euro 2020 winner looked like a man with something to prove as he competed against his potential future employers. Had the first real chance of the game with a dangerous shot from the edge of the box. He then unleashed his threats by opening the shot on goal with a clinical close-angle finish.

The Ivorian is in hot form at the moment but failed to impress against Massimiliano Allegri’s men. Made some promising runs but was generally wasteful.

A generous performance from the striker who has worked hard for the cause. The former Genoa player wrested the ball from Morata to start the game that produced his side’s goal. Should have scored himself but his thunderous shot was somehow saved by Szczesny.

The 10 biggest Serie A flops this season – including the stars of Juventus, Inter and Milan

A mixed bag for the former Arsenal shot-stopper, who was hit at his near post for Sassuolo’s goal. The good easily outweighs the bad, however, as he made a number of saves throughout the game, including a wonderful block from Scamacca’s vicious punch.

The former Milan caused problems for the hosts with his dangerous crosses in the first half every time he trotted forward. In the second third, however, his clout waned.

It wasn’t a bad outing for the Italian center. Despite this, he was lured out of position at times and Allegri opted to knock him out in favor of Chiellini early in the second half.

The veteran defender was unable to get close to Raspadori in front of goal but was otherwise solid for the most part. His long ball instigated Kean’s winning goal.

Aside from a few routine interceptions, the Brazilian offered very little for Juventus for the vast majority of the game. But he’ll be happy to have an assist to his name after heading the ball in Kean’s direction.

The winger combined well with Dybala and De Sciglio in the first half but almost disappeared when Allegri switched to 3-5-2 in the second half. But still worked hard.

The Swiss midfielder ran out of his socks in the middle of the park, but did little to build up the game. Was second best for Lopez. Nevertheless, Dybala provided the template for the equaliser

The ex-Real Madrid player started again as a defensive midfielder but looked lost between the lines. His performance improved noticeably after the tactical switch, joining Chiellini and Bonucci at the back.

The Frenchman won a lot of balls for Juventus but unfortunately he squanders almost as much possession. But in general a decent display.

The Argentine suffered on the slippery pitch and missed the ball in dangerous places. His timely equalizer, however, revived his side’s hopes. Left the pitch early in the second half.

The former Chelsea man was the man behind Dybala’s goal as he beat Kyriakopoulos for the ball. He almost scored twice himself, but Consigli made a great save from his header as his shot whistled wide of the post.

The captain came on the field early in the second half and his contribution was crucial while Juventus tenaciously defended against Sassuolo’s attacks.

The Serb couldn’t really get a handle on the match and had to starve.

That Azzurri The forward was the night’s hero, scoring from half a chance when the Bianconeri looked set on a point. Used his power to flip his marker before unleashing a powerful shot that went past Consigli.