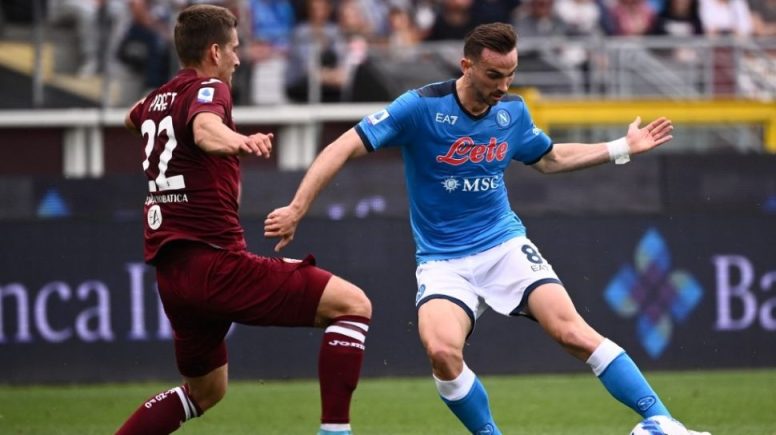 Napoli continued their winning streak as they defeated Torino by a single goal at the Stadio Olimpico di Torino. A goal from Fabian Ruiz was enough to claim victory and cement their position in the top 3 of the Serie A table. Luciano Spalletti’s side had several chances to score, but were unable to take advantage of them. Still, they got the three points and will try to end the league on a high.

Napoli remained unchanged after their overwhelming victory over Sassuolo, while Torino made five changes from their win at Empoli. Bremer and Armando Izzo replaced Koffi Djidji and Buongiorni respectively. In midfield, Samuel Ricci and Rolando Mandragora started up front

No goal scored in the first half

Koulibaly was fouled by Belotti, Mertens took the free kick over to the corner. Lozano Cross Insigne Header, collected by the goalkeeper. Osimhen shot the corner from a tight angle. Torino had the first good chance of the game when skipper Andrea Belotti tried to head in from a cross. However, David Ospina made a nice save to thwart him. Napoli’s first chance came from Andre-Frank Zambo Anguissa when he received a pass from Hirving Lozano. However, the Cameroonian’s shot went just wide. Napoli continued to attack, Kalidou Koulibaly ran forward but was fouled by Belotti. Dries Mertens took the free kick that followed, but it was deflected to a corner. That Partenopei had a few chances but couldn’t take them.

Mertens misses, Rui heads away to the corner. Napoli receive a penalty after Mertens was fouled by Izzo. Berisha saves Insigne’s penalty. Insigne was prevented by on goal, but Izzo challenged. Lozano to Psimhen, shot held by Berisha. Belotti shot over the goal. Fabian Ruiz opened the goal after dribbling. Pobega was in goal but Koulibaly made a crucial challenge to prevent him from finding the net. Zielinski tried a cross, which Bremer blocked for a corner. Napoli continued to attack relentlessly in the second half and won a penalty after Mertens had fouled Izzo. Lorenzo Insigne stepped forward but his shot was saved by Etrit Berisha. The Napoli captain had a chance to unload a shot but a challenge from Izzo was enough to stop him. Hirving Lozano played a pass to Osimhen who fired a shot but Berisha made a good save to thwart it. Napoli finally found their goal after Fabian Ruiz dribbled past some opposing layers before hitting the back of the net with a left footed shot. Torino tried to find an equalizer but couldn’t. In the end, the guests all got 3 points.

What’s next for Napoli and Torino

Next up is a home game against Sassuolo. That Partenopei will definitely want to get all three points and have a fair chance to do so. Empoli host Torino next weekend and given their current form it will be a tall order to secure a win against Ivan Juric’s side. GAME scorecard May 7, 2022 – Serie A 2021-2022 Round 36 TURIN – NAPLES 0-1 Scorers: 73′ Ruiz (N) REFEREE: Mr. Marinelli REMARKS: Yellow cards: ; Overtime: 1st half 0′, 2nd half 5′