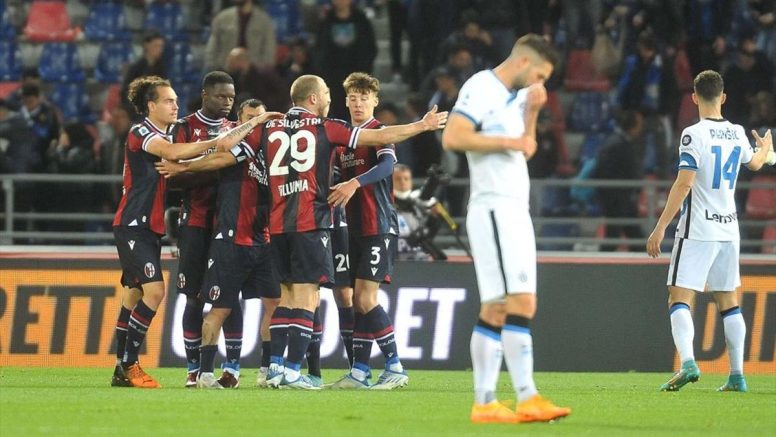 Inter suffered a major blow in their title defense when they were beaten 2-1 by Bologna at the Stadio Renato Dall’Ara. Thanks to a great shot by Ivan Perisic, they got off to a brilliant start. However, Bologna equalized with a header from Marko Arnautovic. That Rossoblu found their winner after Ionut Radu misjudged a throw from Perisic and Sansone hit the net. This is a huge blow to Inter at this point in the title race and they will be counting on Milan dropping points for any chance of defending the title.

Inter made just one change from beating Roma, with first-choice goalkeeper Samir Handanovic on the bench and Ionut Radu in his place. It was the Romanian’s first Serie A start of the 2021/22 season. Bologna made five changes from the draw with Udinese, with Lukasz Skorupski starting between the posts ahead of Francesco Bardi. Gary Medel and Adama Soumaoro were in central defence, replacing Kevin Bonifazi and Luis Binks respectively.

Inter got off to a flying start when Ivan Perisic opened the scoring from a left-footed shot. That Nerazzurri were by far the more dominant of the two and had plenty of opportunities to extend their lead. First Dimarco shot at goal, but it was blocked by Lukasz Skorupski. Lautaro Martinez also had an attempt on goal, but it went just wide. Then Milan Skriniar also galloped forward and shot at goal, but his shot went wide. Bologna equalized after Arnautovic headed in a cross from Musa Barrow.

Martinez and Sanchez score 3-1 as Inter

Inter wanted to score and had several chances to do so. Dumfries tried to find the net a couple of times but couldn’t redeem it. Bologna also had their moments during the game when Arnautovic came towards the goal. However, the Austrian was denied by Skriniar’s defense. Lautaro Martinez and Edin Dzeko also had chances to score, but were unable to take them. Bologna finally found its winner through Sansone. It was a disappointing performance from Inter who are now 2 points behind Milan.

What’s next for Inter and Bologna

Inter will travel to Udine for the game against Udinese at the weekend. That Nerazzurri will imagine their chances against them Friuli and have a good chance of getting all three points. Bologna have a tough game as they travel to the capital Rome to take on Jose Mourinho’s Roma, who have not lost at home since January. However, Bologna have avoided defeat in their last two away games against Juventus and Milan, so we shouldn’t rule out that they could win something from this game. GAME scorecard 27 April 2022 – Serie A 2021-2022, Day 20 (continued) BOLOGNA – INTER 2-1 Goalscorers: 3′ Perisian (I)28′ Arnautovic (B), 88′ Maggiore (S), 90+3′ Sanchez (I)