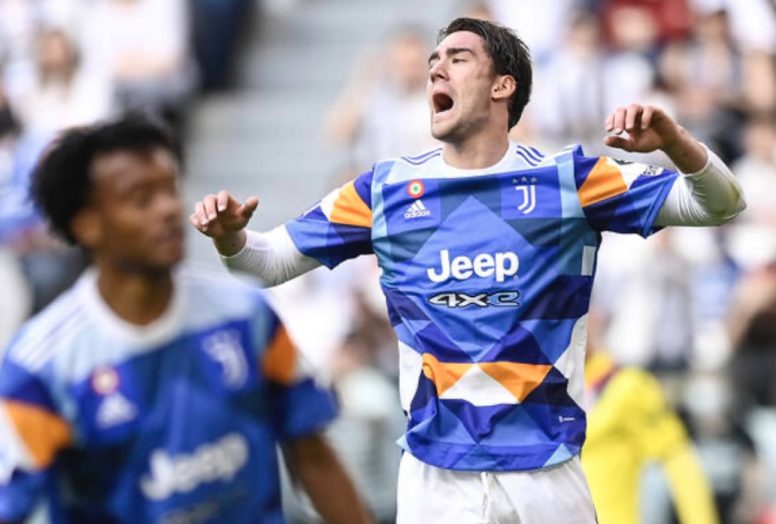 A late, late header from Dusan Vlahovic ensured Juventus salvaged a point against Bologna in Turin today. After a less than eventful first half, Bologna opened the scoring thanks to Marko Arnautovic. Juventus fought hard but it wasn’t easy to get past the opposition defence.

Dusan Vlahovic equalized in added time thanks to Alvaro Morata’s acrobatic assist. Massimiliano Allegri might not be too happy with just one point, but something is better than nothing.

Both teams made two changes from their previous games. Juventus started Mattia de Sciglio and Morata with Arthir and Denis Zakaria on the bench. Bologna replaced Michel Aebischer with Roberto Soriano and started Riccardo Orsolini in place of Musa Barrow.

Juventus wanted to attack from the first minute but couldn’t find the target. Vlahovic had a header on target, but it went over the bar. That Bianconeri won a free kick after a hand ball from Arthur Theate. Paulo Dybala kicked up, but his free kick went wide.

Bologna also had moments when they attacked but couldn’t find the net. Finally, the first half ended with the stalemate not yet broken.

Juve looked for an equalizer and had a very good chance when Luca Pellegrini crossed from the left. However, Adrien Rabiot failed to touch the ball. Bologna then opened the scoring with a pass from the left after a nice pass from Soriano. However, the Austrian had to be replaced due to injury. Juventus continued to attack the Bologna back line and were desperate to equalize. However, the visitors’ defensive line was solid enough to contain their attackers.

That Bianconeri had a solid scoring chance when Adama Soumaoro Despite the two-man lead, Juventus failed to equalize. Eight more minutes were added after the 90 and Juventus attacked relentlessly to equalize.

Juventus won a corner executed by Federico Bernardeschi. The ball was about to go wide but Morata managed to save it with an acrobatic pass to Vlahovic, who headed in to level. That Bianconeri kept attacking in search of a winner

What’s next for Juventus and Bologna

Juventus meet Fiorentina in the second leg of the Coppa Italia semifinals. They currently lead 1-0 overall. La Viola are quite a decent side and it won’t be easy for Juve to beat them. However, the Bianconeri play in front of a home crowd and calculate their chances of reaching the final. Bologna host Udinese next weekend and it won’t be easy to beat them as they have won three games in a row.