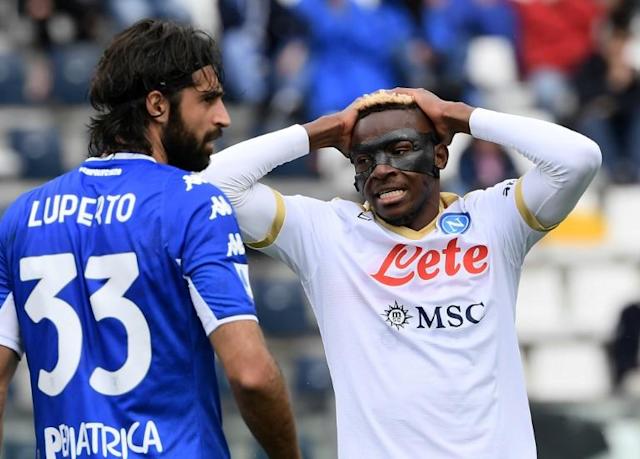 Napoli gambled away a two-goal lead when they lost to Empoli today. It took a late brace from Andrea Pinamonti to pretty much end the game partenopeis Title challenge as they will fall far behind the two Milan teams. Napoli started well with goals from Dries Mertens and Lorenzo Insigne that gave them a 2-0 lead. However, Empoli hit back and Liam Henderson pulled one back. Pinamonti then scored twice to win the game for the hosts. It ended a 17-game winning streak for them.

Pinamonti had the first good chance of the game but his header went wide. Napoli’s first good chance of the game came from Fabian Ruiz, but his shot from distance also went wide. The visitors tried to find their goal from a corner but Osimhen’s header was deflected. Bandinelli then had an attempt on goal, but to no avail. Asllani then tried to score but his shot was saved well by Alex Meret. Thanks to Mertens, Napoli finally found the opening goal shortly before half-time.

Napoli got off to a very good start in the second half as they doubled their lead thanks to their captain Insigne. That Partenopei tried to triple their lead but couldn’t. Instead, Empoli managed to pull one back through substitute Henderson. Just minutes later, Pinamonti scored a brace to turn the tide for the hosts and seal three points. Spalletti will no doubt assess the pros and cons of his team as they look to battle for the league next season. Of course, Koulibaly’s absence has affected the team, but Napoli need to do much better if they want to fight for titles.

What’s next for Napoli and Empoli