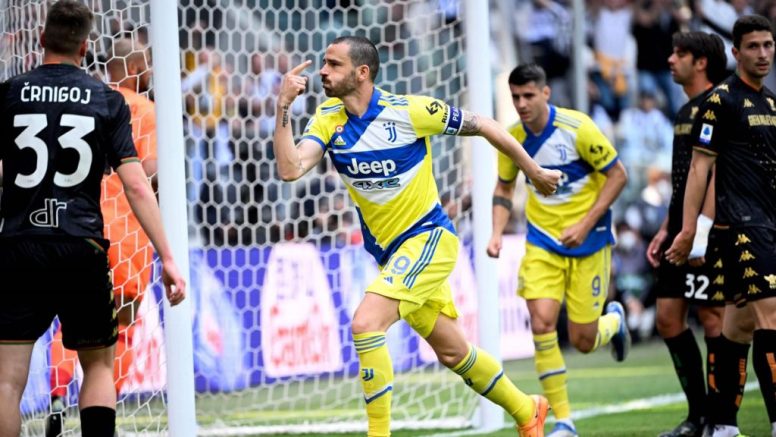 Early on Sunday, Juventus hosted Venezia at the Allianz Stadium in Turin. The home side took the lead after an early attack as Leonardo Bonucci nodded the ball home. However, Massimiliano Allegri’s men left the initiative to the visitors. After several threats, Mattia Aramu finally equalized with a fabulous goal, but the Bianconeri quickly regained their lead thanks to Bonucci. So here are our player ratings for the Round 35 match between Juventus and Venezia that ended in a narrow win for the hosts.

The former Roma keeper has been far busier than one would expect in a game against a bottom-placed side. Nonetheless, he was up to the task and made some brilliant saves against Aramu, but the latter gave him no chance with a stunning goal.

Before the game, Allegri mentioned the Brazilian as one of the players who needed some rest. The right-back obviously wasn’t at his best physically but still managed a decent displacement at the back. Could have scored from close range but his header went wide of the target.

A solid performance from the former Ajax captain who dominated his territory and won most of his clashes against Henry and Co. Set up the assist for Bonucci’s opener with a header.

It’s not everyday for a centre-back to leave the pitch with personal braces but the veteran Italian managed to make it on his 35th birthday. His first goal came with a clear header, while the second was all about guts and determination as he lunged for a Tormaul scramble. Also put a solid shift at the back.

Aside from a few jittery moments, the former Cagliari man appeared energetic and inspirational on the left. Almost scored an early goal but his long-range shot hit the bar.

Not a bad performance from the Euro 2020 winner who delivered a great cross to Danilo but perhaps he needs to do more to land a new contract at Juventus.

The Swiss started well, his spectacular volley was the game’s first real chance, but his performance flagged after being booked late in the first half.

The 18-year-old impressed everyone on his Allianz Stadion debut. Orchestrated the game for Juventus with his elegant touch and vertical long ball. His brilliant dead ball skills were behind bianconeris two goals.

The Frenchman confirmed his improvement with another good performance. Retrieved the ball countless times and sprinted to decisively intercept a dangerous counterattack from Venezia. But he still has to work on his technical skills.

Another stunning performance from the Serbian bomber who seems to be lacking in fitness and sharpness. It took an extra few seconds before he fired his shots.

The ex-Real Madrid player missed a few chances in the box but worked hard for the cause, supporting his team-mates in defense and helping get the ball out of his team’s areas.

Although he didn’t fare badly, the old lady’s dangerous left flank slowly died out after the Brazilian’s introduction.

The Argentine helped keep the ball late in the game but failed to create anything notable during his cameo.

The former PSG man struggled to keep possession but came on at a point when Juventus ran out of chances.

Milan or Inter: who is the favorite for the Scudetto?

The Finnish veteran cannot be blamed for either goal and surprisingly had little to do for the rest of the game.

A solid performance from the youngster on loan from Chelsea who worked extremely hard at the back and made some crucial clearances against the likes of Morata and Vlahovic.

Despite his team’s defeat, the former Juventus and Milan defender was able to prevail against Vlahovic in his personal duel.

Another strong player behind for the Arancioneroverdi. The Venezia captain set an example and tried to free his team-mates with some long balls.

The full-back didn’t always push forward but caused problems for Juventus with his dangerous crosses from the right flank.

The box-to-box midfielder made a difficult transition for the visitors but was rarely able to break into the defences.

The deep playmaker enjoyed a good game before suffering a facial injury late in the first half from a contract with Bernardeschi. Spread the ball in midfield with ease.

The ex-Bayern Munich player had little impact in the first half and was absent after the half-time break.

The left-back trotted up and down the flank but was wasteful with his crosses and shots. I received a booking for a frustrated challenge on Dybala.

After scoring in the second leg against Juventus, the former Torino man finally managed to break his duck and hit the back of the net against his favorite victims. He was the visitors’ most dangerous player and almost scored a couple of times before finally leveling with a magnificent goal.

The Frenchman almost equalized in the first half but his header went wide of the post. Proved to be a major threat in the air due to his strong physique, but Bonucci and de Ligt helped each other contain him successfully.

That register replaced the injured Vacca and managed to keep things going in the middle of the park while also keeping Dybala at bay in the second half. Initiated the game that led to Aramu’s goal.

The introduction of the Moroccan at half-time generally improved Venezia as he kept running towards the Juventus box with his speed and dribbling skills.