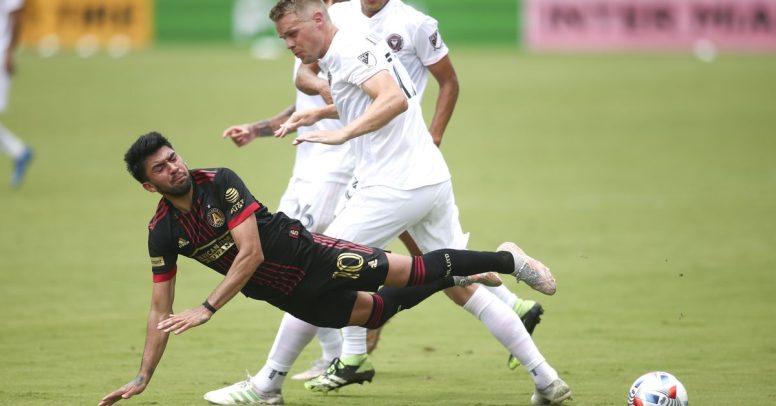 Atlanta United’s US Open Cup third-round encounter with Chattanooga didn’t seem all that significant on the surface but it just might have been exactly what the doctor ordered for the Five Stripes. Atlanta soundly thrashed the NISA club 6-0, scoring 60% of its total tally through seven MLS games. Sure, Chattanooga isn’t exactly top-notch opposition and it was a mostly rotated XI from Gonzalo Pineda, but throwing the shackles off in the final third even for just ninety minutes can only help a struggling Atlanta attack. And just maybe, this will spark the Five Stripes into action as it returns to league play with a visit to Inter Miami on Sunday.

Miami was the last winless team in the Eastern Conference as of two weeks ago, but since has three victories in a row (perfect timing, eh?), two in MLS (3-2 over New England and 1-0 at a heavily- rotated Seattle) and a narrow win over Miami FC in the Open Cup. This run of form has interestingly coincided with an injury to Gonzalo Higuain, who’s watched from the stands as 21-year-old Ecuadorian forward Leonardo Campana (4 goals) fills in admirably. With Higuain out of the lineup, manager Phil Neville has switched to a 4-3-3 shape with a far more mobile front three; Robbie Robinson (who scored the winner against Seattle) and Ariel Lassiter flank Campana and have a tendency to drift between the lines to cause havoc. Miami is by no means good, however. Its expected goals (7.5) and expected goals against (10.4) are 10th and 11th in the Eastern Conference, respectively. This all comes after an incredibly active offseason in South Florida, in which 22 players arrived and 33 departed as Miami tried to navigate its roster sanctions for the Blaise Matuidi deal. Miami does have some solid building blocks at its disposal (DeAndre Yedlin, the midfield pivot of Gregore and Jean Mota, and the aforementioned Campana), but so far its roster has far too many holes to be in the playoff hunt.

Despite some less-than-ideal results of late, Atlanta still sits in 4th place in the East. The Five Stripes are deadlocked on 11 points with the Red Bulls and Toronto, while 9th-placed Columbus is only three points away. That’s not even to mention NYCFC and New England, two sleeping giants that sit below the red line but have begun to wake up. In short, the East is a mess. Atlanta’s next four matches are against inter-conference opponents (Miami, Montreal, Chicago, and New England) so the Five Stripes are at a bit of a crossroads. Can they string together some wins and firmly put themselves in the race for the top seeds, or will Atlanta be stuck in a jumped mess with the rest of the Conference?

Miami will keep it close, but ultimately Atlanta will overpower the Herons and take all three points from Fort Lauderdale thanks to goals from Thiago Almada and Ronaldo Cisneros.