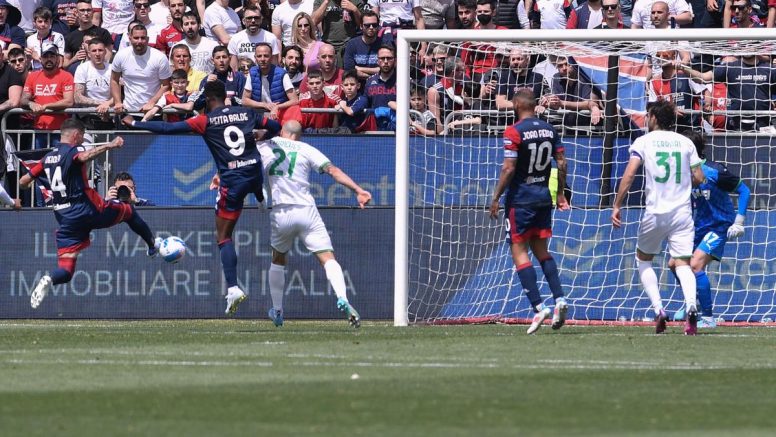 Cagliari returned to winning ways after a five-game losing streak in this Saturday’s Serie A opener as they beat Sassuolo in their first win over Sassuolo Neroverdi in over six years.

Manager Walter Mazzarri confirmed pretty much the same squad that nearly led Juventus to a draw last week, with the exception of Keita Balde, who favored Leonardo Pavoletti in attack, and Alberto Grassi in midfield, who supported Razvan Marin and Alessandro Deiola.

Sassuolo’s Alessio Dionisi had to leave Domenico Berardi out of the squad with a bruised ankle, with Gregoire Defrel taking his place alongside Giacomo Raspadori and Hamed Traoré.

Cagliari got off to a strong start and created many chances, but Sassuolo goalkeeper Andrea Consigli saved the result several times.

In the 20th minute, a hard clash between Dalbert and Jeremy Toljan resulted in a dislocated shoulder for the Sassuolo right-back, who had to leave the field early. His replacement Ruan was immediately cautioned by the referee for a foul on Keita.

Cagliari continued to press and almost scored with Italy right-back Raoul Bellanova, who almost conceded an own goal from Sassuolo’s centre-back Gianmarco Ferrari. Sassuolo’s only chance came in the 35th minute, when a quick counterattack by Hamed Traoré was blocked by a superb save from rushing goalkeeper Andrea Cragno, who salvaged the score with a header.

With three minutes left, Alessandro Deiola broke his dreadlocks: Marin put in a beautiful cross from the right, the ball went through the Sassuolo defense and found Deiola free to get in and share the shot. After just two minutes, Cagliari doubled their lead with a commanding header from Joao Pedro, but the VAR recalled referee Massa and asked him to allow the goal.

In the second half, Sassuolo came out of the dressing rooms more determined, with the usual Traoré doing his best to level the score. However, it was Cagliari who had the first clear opportunity, once again with an almost own goal from Romanian defender Vlad Chiriches that involved Sassuolo’s goalkeeper Consigli.

Both Dionisi and Mazzarri made some substitutions later in the game, bringing in Rogerio and Emil Ceide Neroverdi and Leonardo Pavoletti, Marko Rog and Daniele Baselli for the Rossoblu.

Sassuolo never became dangerous enough to frighten Cagliari, who even had the opportunity to double the lead with a deflected Pereiro shot that hit the post. After six minutes of added time, Cagliari was finally able to celebrate the long-awaited victory.

What’s next for Cagliari and Sassuolo

Cagliari will travel to Genoa next week to face Genoa in a high-stakes relegation battle matchup: the Casteddu are six points clear of third-bottom Genoa and this encounter will certainly play a major role in the fate of both teams. Sassuolo will host Juventus at home Bianconeri try to secure their place in the Champions League.