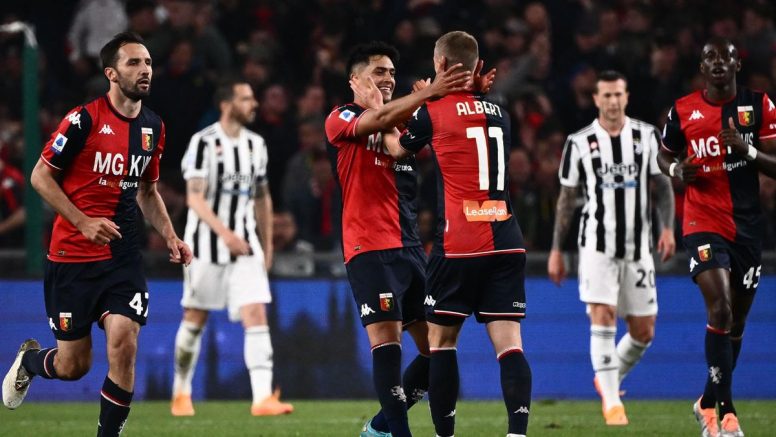 In the 36th round of Serie A, the ailing Genoa hosted Juventus at the Luigi Ferrari Stadium. The first half turned out to be a complete slumber party, the cautious Ligurians unwilling to take risks and the visitors almost disinterested after finishing in the top four last week. However, the encounter came to life in the second half after Paulo Dybala’s opening goal. The wasteful Bianconeri could not finish the work as they allowed grifone to complete a stunning comeback as Domenico Criscito redeemed himself with a last-minute penalty shoot-out after his failed attempt against Sampdoria last week.

Alexander Blessin started in a 4-2-3-1 formation, led by the experienced Mattia Destro, who was supported by youth trio by Filippo Melegoni, Nediem Melegoni and Manolo Portanova. Pablo Galdames and Milan Badelj started in double pivot.

At the other end, Massimiliano Allegri unleashed a 4-3-3 formation, with captain Paulo Dybala and Moise Kean joining Dusan Vlahovic in attack. Young sensation Fabio Miretti started for the second year in a row, supported by Adrien Rabiot and returnee Arthur Melo in the middle of the park.

In defence, Juan Cuadrado and Mattia De Sciglio also made comebacks from brief touchline stints to take on the role of full-back, while Daniele Rugani was given a rare chance to play at the heart of Leonardo Bonucci-led defence.

After dominating possession for the first five minutes, the visitors created the game’s first major scoring opportunity when Dybala’s precise cross from the right flank put Kean in front of goal, but the Italian’s header went over the woodwork.

Unfortunately, that was one of the very few thrilling moments of an absolutely miserable first half of football, with neither team producing anything worth mentioning.

Juventus had some half-chances through the likes of Kean and Dybala, while Portanova produced Genoa’s finest moment at the end of the half, but the ex-Bianconero saw his long-range shot saved by Wojciech Szczesny.

Still, the second third started with a better grade than that grifone almost broke the deadlock right after the restart, but Destro’s erratic shot went towards goal curve north stands.

This turned out to be the spark that ignited the evening. A minute later, Kean was struggling to keep his marker off the ball before feeding Dybala standing on the edge of Genoa’s penalty area and the Argentinean unleashed a shot with his weaker right foot that found its way into Salvatore Sirigu’s bottom corner and gave Juventus the lead out of the blue.

In the middle of the second period La Joya almost completed his personal brace after a pass from Vlahovic. The number 10 ran through a variety of Rossoblu defender before unleashing a scorcher that crashed into the bar.

A moment later, Rabiot’s pass found Kean in the box but the former PSG striker was thwarted by an excellent reaction from Sirigu, who then repelled another beautiful save against Vlahovic’s attempt.

In the 82nd minute, the referee awarded a penalty for Juventus after a challenge from Albert Gudmundsson against substitute Marley Aké, but the decision was overturned after a VAR review as the Genoa player appeared to have reached the ball first.

That proved to be a real turning point as the hosts leveled late when Amiri’s brilliant through ball found Gudmundsson in the box and the Norwegian shot through Szczesny with a clean finish.

A minute later, Genoa almost turned the score on its head after a horrible mistake by Rabiot, but Amiri’s shot was somehow blocked by the Juventus keeper.

Late in injury time, Kean missed a golden chance to seal the win for the visitors, allowing the hosts to score a last-minute penalty at the other end. Their captain, Criscito, had the nerve to take it and give his side a win that would save Genoa’s chances of staying up.

It was a night to remember for Ligurians, who punished the altruistic and wasteful Bianconeri.