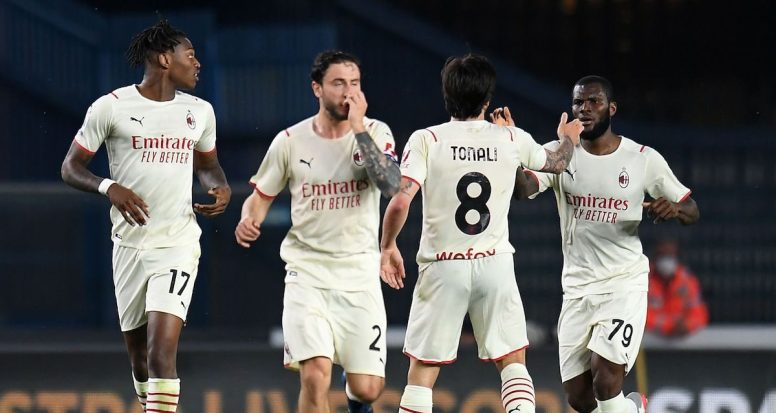 After Inter’s deficit win over Empoli on Friday, Milan entered the field at the Stadio Marcantonio Bentegodi with two goals in mind; breaking the old Verona curse and restoring the lead in Serie A. The gialloblu was known to have sabotaged the Rossoneris Title hopes twice in the past but it was the third time that was a godsend for the Lombardi club who clinched an invaluable comeback victory.

As usual, Igor Tudor unleashed the devastating attacking trio of Giovanni Simeone, Antonin Barak and Gianluca Caprari in his favorite 3-4-2-1 formation. Ivan Ilic and Adrien Tamèze took on the dual role, while Davide Faraoni and Darko Lazovic acted as full-backs.

On the opposite corner, Stefano Pioli maintained a 4-2-3-1 formation led by Olivier Giroud, who was joined by Alexis Saelemaekers, Rade Krunic and Rafael Leao. Franck Kessié started next to Sandro Tonali in the middle of the park. Mike Maignan was, as always, the man between the posts for Milan, with Davide Calabria, Pierre Kalulu, Fikayo Tomori and Theo Hernandez in front of him.

After testing the waters in the opening 12 minutes, Milan had their first real chance of the game when Saelemakers’ cross from the right found Krunic in the Verona box, but the Bosnian’s header was tipped over the woodwork by Lorenzo Montipò.

Still, the visitors’ rush had only just begun and Tonali scored after a wrestling match against Ilicic on his 22nd birthday, but the goal was disallowed by VAR due to a narrow offside position. The birthday child then Calabria found with a stunning touch but the right-back’s shot failed to beat Montipò.

In the 22nd minute, the hosts responded with their own chance. Faraoni supplied Caprari with a terrific ball in the penalty area. The number 10 took the shot with his first touch but the ball whistled wide of the post.

That gialloblu In the 34th minute threatened again. Tamèze stole the ball from Krunic in the middle of the field, allowing Barak to run towards the Milan penalty area before picking up Simeone with a clever pass, but El Cholitos Shot hit the side netting.

After their two warnings, Verona finally fulfilled their threat and broke the deadlock with an impressive game. Caprari picked up Lazovic’s run down the left and the Serb found his full-back Faraoni with a spot-on cross and the latter made no mistake as he deflected the ball into goal from close range.

But seconds before the half-time whistle, the Diavolo found the balance. Tomori picked up a loose ball down the middle and immediately spotted Leao on the left. The Portuguese dribbled past Nicolò Casale into the box before sending a pass towards the mouth of the goal. Tonali had to put just one foot in front to grab a deserved goal.

After the break, Milan picked up where they left off, pouncing on a feeble corner kick from Verona to start a counterattack that resulted in a second goal. Saelemaekers’ pass released Leao on the left. In a copy of the first goal, former Lille man gifted Tonali with a wonderful ball that allowed him to score from the simplest of tap-ins.

The second half turned out to be a less entertaining affair for the most part Rossoneri happy to be sailing safely towards victory.

Nonetheless, Alessandro Florenzi managed to score the third goal for Pioli’s men just minutes after coming on. The former Roma captain played a great give-and-go with Junior Messias before charging into the box and unleashing an unstoppable low drive towards the far corner.